Are Amalgam Fillings Safe to Put in Your Mouth? 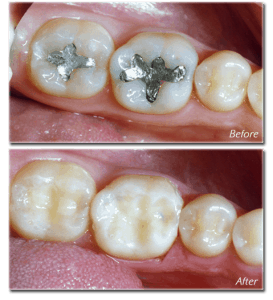 Amalgam is a common material to fill cavities. The silver material contains mercury. The safety of mercury in the mouth has been questioned by many health care professionals. You probably know what these are if you’ve had them or seen them in someone’s mouth. It’s the silver that shows in the middle of back teeth. They fill in the cavity. Is it safe to have silver fillings in the mouth?  Biological dentists all believe the amalgam fillings are not safe. But with many people trying to improve their health, metal fillings have truly become a main stream concern. Especially for people having health problems such as cancer, auto immune disease and dementia.

Symptoms Suspected to be Caused by Amalgam

The problem with silver amalgam that causes concern is that amalgam is a metal that contains mercury. Since mercury is unsafe to the body, do silver fillings pose a threat since they contain mercury? Many dentists, doctors and the FDA believe silver fillings are safe despite containing poisonous metals including mercury. Some dentists and doctors believe amalgam fillings are not safe. An organization called the IAOMT is a group of dentists and doctors who believe silver fillings are not safe. The IAOMT has a safe mercury amalgam removal protocol for people who want amalgam removed in a “safe” manner.

What is in Amalgam Fillings?

Before we answer this question, let’s understand what makes up amalgam. Amalgam is made up of several metals, such as silver, mercury, tin and copper. It also has some zinc, indium, and palladium in it. This type of filling has been used by dentists for over 150 years.

Recently, people have been requesting a different type of filling – a tooth-colored one. Most if the time, this is not because of health or safety concerns, but because they don’t want to see the metal in their mouth. Unfortunately, tooth colored fillings are more expensive than mercury fillings. Also, until recently, the white fillings did not hold up as well over time. Now tooth colored fillings have many advantages over amalgam fillings are a better choice – the mercury safety issue aside.

Now that you know what amalgam is made of, you probably want to know if it’s safe. The answer is that there is risk to having it in your mouth. According to the ADA and U.S. Food and Drug Administration has stated that there is no reason to limit its use because it is safe enough for adults and children ages 6+. But there are many health professionals who feel the risk has been understated and down-played by the ADA and FDA,

Safety Concerns with Mercury in Amalgam

Despite the FDA’s amalgam statement, many people are still unsure of its safety. The issue is that the filling is made with mercury and with so many other sources of mercury in the environment it may tip the scales enough to make it a true health risk.

The more mercury someone digests, the worse the symptoms are for them. There is significant amounts of mercury in fish meals. Fish such as salmon, sword fish, tuna and many others can contain mercury.

What is important to know is that while researchers in the past believed silver fillings were inert and did not absorb into the body, recent studies have found that mercury vapor from them does get released and is absorbed by the body as the fillings wear. People who clench their teeth especially absorb a lot mercury vapor.

Not all people with silver fillings get sick, but some people are allergic to it. This causes great concern for many people with metal allergies.  While a lot of people do not have metal allergies, it is something that does happen and people need to know about it. A common problem with allergies is the delayed response. Someone may not be allergic to dental metal and then a year later they are allergic. The symptoms to allergies to metal in the mouth may not be rash and hives. It may be just minor gum inflammation and bleeding of the gums that persists even thought brushing and flossing is perfect.

What many people want to know when they have metal-based fillings is how they can get them removed. It is possible to have silver fillings removed and replaced with a different type of material – a safe, just as effective material. Alternatives to amalgam fillings include composites, porcelain and zirconia.

Removing Fillings with Mercury in a Safe Manner

For those who are concerned about the mercury in silver amalgam, it is possible to have it removed in a safe manner. Mercury removal is done by experienced dentists who understand the risks. The process is technique sensitive but simple for a properly trained dentist. People should do research before deciding to have it performed.

How is Safe Mercury Removal Done:

It is highly important to take adequate precautions when it comes to mercury removal since the debris can remain the air for quite some time. This means people can breathe the mercury in and that elevates their levels, which could be harmful. Managing the amount of mercury in the air is highly important, and something we take serious in our dental office.

Not all dentists offer zirconia fillings, so it’s important to ask if the dental office you’re considering has them.

Some dental insurance companies cover replacement of silver fillings, but only if the silver filling is defective, with a crack or a cavity under it. Many dental insurance policies do not cover metal filling removal due to the FDA stating they are not a threat to people’s health. The expense of removing the fillings may be worth it to you especially if you’re concerned about the effects of them on your health. Porcelain fillings are also not usually covered by dental insurance because of the option of less expensive metal ones. Some insurances will cover a portion of porcelain fillings up to the cost they would pay for the metal ones, and the rest of the cost is the responsibility of the patient.

Ask your insurance provider or dental team to check on what is and isn’t covered, so you can plan on the expense.

Contact Us for Metal Filling Removal and Porcelain Fillings

We are proud to offer safe metal filling removal. We abide by the IAOMT protocol to ensure safety of patients and the entire dental team. In place of metal fillings, we recommend non-metal porcelain fillings. They are more attractive, safer, and last just as long as metal ones.

Contact us now to ask us questions and book an appointment.