Is Mercury Released from Amalgam Fillings During Teeth Clenching: 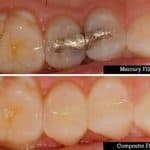 Amalgam filling removal in people who grind their teeth can be challenging cases. Clenching accelerates mercury release from amalgam fillings as a result of friction and heat. Friction from teeth contact causes release of mercury gas that can be absorbed into the body. Mercury containing fillings break-down faster and pieces can break away and be ingested. Wear of teeth enamel including cracking, chipping and abrading will decay and will prematurely break down existing fillings. In the picture below, the yellow area adjacent to the amalgam filling is where all of the white enamel has been worn away, exposing the underlying Dentin. The amalgam filling is also crumbling and separating from the tooth.

TMJ or TMD is defined as a misalignment between the best fit of the teeth and the path of closure of the jaw. Airway problems also cause teeth clenching during sleep. It is also typically complicated by an upper airway problem and general complaints from the patient about head, neck and upper back tension. The “TMJ” causes tooth clenching and grinding or bruxism among many other symptoms.  Temporomandibular joint problems can be diagnosed and cured by a specially trained dentist using dental appliances for sleep apnea and TMJ. 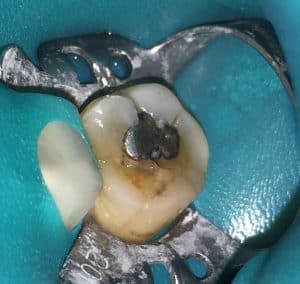