Are Root Canals Safe and Should They be Removed?

Do Root Canals Need to be Removed?

If you are on the fence about whether or not to remove your root canal teeth, this article is for you. People often wonder if infections from root canals can contribute to other health conditions such as cancer, autoimmune conditions and thyroid problems.  Do you have Hashimoto’s disease? Root canals are a risk factor and removing them reduces systemic inflammation. But is it even possible to make a direct connection or know how one gets cancer from smoking? No one really knows exactly how cigarettes cause lung cancer. But it does. And we all know it. And of course not everyone who smokes gets lung cancer. Where there is smoke there is always fire, right?

Schedule a no cost consultation with Dr. Adams to get a 2nd opinion about the success of your root canals. Or if you need a root canal or whether or not you should get one.

Once a root canal is done it can never be reversed. When the pulp and nerve tissue inside a tooth starts dying, the tooth will either need to be extracted or a root canal procedure is necessary – it is that simple. Root canals can save teeth, but at what expense to your pocket and health? Should a dying tooth be removed instead of getting a root canal? A dental implant is an alternative to getting a root canal. Related article – root canal vs implant

Molar Root Canals Last 5 to 10 years on the Average

This article discusses the pros and cons of root canals and how to safely remove root canals once they abscess and fail. Root canal teeth will eventually crack, break or create an infection inside your jaw. Like a dead tree, the root canal tooth becomes brittle, rots internally and leaks its infestation into the jaw and surrounding lymphatics and blood supply. They do not last forever. On the average they last 5 – 10 years before causing noticeable pain and problems. Does a root canal cost more than an implant? 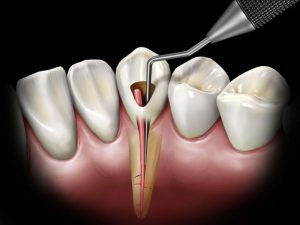 A root canal is a filling in the root of your tooth where the nerve used to be. Prior to filling the root, the dentist cleans it as best as they can with bleach. But it is impossible to clean all the pores in the root. Over time, bacteria and fungus can grow in the tooth and leak out into the bone and surround blood supply. The immune system of healthy people will usually kill the bacteria and fungus as it leaks out. But no one really knows what happens or where this bacteria can go in your body. Root canal teeth once extracted can be tested by DNA Connexions to determine the pathogens in the tooth. Holistic dentistry considers how a procedure may impact overall health and attempts to do no harm to overall health.

Infections and Toxins in Root Canals can be Dangerous

Bacteria, fungus and toxins can increase the chances of getting diseases such as cancer and autoimmune disease. Additionally, some people can be sensitive or allergic to the filling in the root. It is really that simple. A root that can leak bacteria and filling material can be inflammatory and infectious. Additionally, the dead tooth, like a dead tree gets more brittle over time. And it eventually fractures. These are the reasons why root canals do not last forever. But in certain cases they can last 10s of years. And a root canal is the only way to save a tooth from extraction once the tooth dies. But are you just buying time? And it will need to be removed anyway? Nothing lasts forever. Not the person, the root canal or a dental implant.

Why Do Nerves in Teeth Die?

If a tooth is dying or dead there are no alternatives other than a root canal or extraction. Your best bet is to try to prevent the tooth nerve from dying with treatments such as dental ozone. And correcting the cause of the problem such as a high bite or deep cavity. Implants are considered to be the best alternative treatment to a root canal. A dental implant is not an exact alternative to a root canal since it involves removing and replacing the tooth. Here are all the options:

Are root canals a waste of money and time?

Some people make this decision based upon value and dollars and cents. Considering a root canal on the average lasts 5-10 years, many people will go right to the implant. Implant dentists expect implants to last a lifetime. Others opt to do everything they can to save their natural tooth, spending whatever it takes to try to save their tooth. Some people feel like rather than risk having bacteria leak into their body and losing money, they will go right to the implant. Anyone making an educated decision cannot make the wrong decision. It is up to the patient to select the treatment they want based on informed consent. 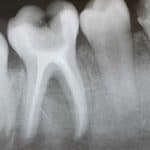 What is the biological root canal removal protocol:

A documentary called “Root Cause” is available on Amazon but has been removed by Netflix. Root Cause details some of the medical concerns about root canals and jaw bone infection. Root canals are thought by many to cause cancer and autoimmune disease. The truth of the matter is – it is not that simple. On one side of the argument, supporters of root canals say “no peer reviewed studies have linked root canals to cancer or heart disease.”

On the other side, a group of dentists and doctors have noticed that a disproportionate number of their sick patients have root canals. No one can prove that root canals do not cause cancer and autoimmune disease either. It is very difficult to “prove” what causes a disease. Does anyone really know what causes cancer? What we do know is root canals can not be completely clean and do contain bacteria, viruses and fungus. We also know over time, these same pathogens and their toxins leak out into the jawbone and surrounding blood supply. We also know these same bugs can be implicated in certain infection and disease. Not everyone gets sick in any situation. It all comes down to what bug or toxin is present and the susceptibility of the patient.

Then depending on the person and their systemic response, the bronchitis may progress to other secondary disease such as asthma, emphysema, cancer or whatever. The secondary disease may also come years later or never come at all. That is why some people can smoke 2 packs a day till they are 90 years old and never get lung cancer, but for others, smoking a few cigarettes a day while in college may lead to lung cancer later in life.

The truth – it is ridiculous to say that root canals do or do not cause cancer because no one really knows for sure. But as in most facets of life, it is best to make the best decision for yourself provided all the facts and information.

How Safe Are Root Canal Procedures?

Should I Remove My Root Canals? 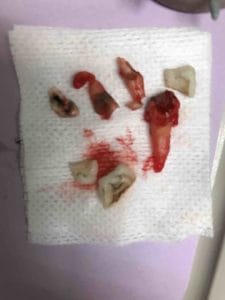 A very similar technique can be used to extract wisdom teeth with ozone and PRF to optimize healing.

Are implants an alternative to root canals video:

Factors to consider when removing a root canal

Root canal teeth are dead. Dead teeth are brittle and can break into little pieces and be difficult to remove. Removal of a root canal tooth is a lot more difficult than removal of a regular tooth. The best strategy is to remove the tooth by taking out the roots one at a time. Once the roots are removed, the dentist can evaluate the root canal extraction site for bone damage, cysts and bacterial and fungal infection. The dentist will need to remove the PDL, any cysts, remove any dead bone, clean all the bacterial and fungal infections. Once the extraction site has been treated, a natural bone graft can be placed to facilitate new and healthy bone growth back into the extraction site. 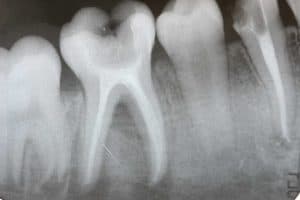 A natural bone graft involves treating the pores of the bone with dental ozone gas, and placing a mixture of PRF and bone minerals and membranes. The process described may be easy or very complex and difficult depending on the extent of the damage caused by the root canal tooth. In extreme cases of infection of the upper teeth, infection can involve the sinus and can be very difficult or impossible to repair. Bone damage and risks of severe infection is one reason why to consider avoiding root canal treatment whenever possible.